Yahoo! is reporting that a massive 300,000 photo card licences are due to expire in the next 12 months, yet a significant proportion of drivers are unaware that the new photo-style licences require updating every 10 years. 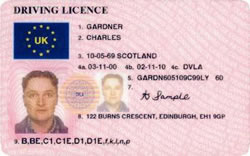 Unlike the superseded paper licence, which was valid 'for life', the new identity card versions feature a 'valid until' date, at which time motorists must shell out an extra £17.50 for a new card. It's thought that a lot of drivers are not aware of this requirement.

This summer marked the 10th anniversary of the introduction of the new photo card licence and of the cards due for update a massive 28% are still outstanding, according to the DVLA. These drivers could face a £1,000 fine if asked to surrender the licence.

Though the expiry date is printed on the front of the photo cards, it can only be identified as such when the owner turns the card over and reads the small print.

Making matters more confusing is the presence on the back of the cards of a date until which time the motorists is registered to hold the licence - their 70th birthday.

According to the DVLA, reminders will now be sent to drivers with photo cards due to expire, while the Association of British Insurers has confirmed that insurance cover is unaffected by an expired photo card.

Next Page: Chris Napier passes test in one week >>